Recap: The Ottawa Explosion... And Beyond! Tour Was Amazing

Hi, everyone! We have just concluded our tour to Ottawa Explosion And Beyond, with tons of cool shows around the Upper Midwest/Great Lakes and a few in the Northeast USA, and of course the first-ever shows the Blue Diamond Band has played in Canada! Roughly 4,454 miles (or 7,168 km) later, we are home and prepping for D4th Of July...

Thanks to everyone who came out to the shows! Some of our best times on the road happened on this tour. The three Canadian shows were SO FUN! We swooped Luke up from the airport in Toronto and played a killer show at The Magpie for our FIRST CANADIAN SHOW EVER. Ottawa Explosion was everything it lived up to be, with all those great bands who can't always just cross the border and come to the Twin Cities every week, ya know? The night in Montreal ending after the "hangover" show under the flyover, with pizza, Tremblay Beer, and singin'? That's my kind of night. (And in the morning, poutine, naturalement!).

Playing with Toys That Kill and/or Underground Railroad To Candyland four nights out of five starting in Ottawa was amazing! Those bands are so good... but TTK's set in Brooklyn at Acheron was one for the books. What a night that was! With Shellshag and Benny & the Jet Rodriguez and Hatrabbits... no wonder the place was at capacity.

We ran out of LPs on this tour... not once but twice! Thanks Mike Dumps for being on the ball and getting the first batch to Detroit in time, but there was no way we could've anticipated how hungry for our little album Canada was going to be. Sorry, Boston - next time we'll make sure we've got some vinyl for ya!

Daniel James (Indonesian Junk, Chinese Telephones, Daniel James Gang, more) filled in on bass for this tour, and did an incredible job of it, too. My old comrade-in-arms from my beloved hometown of Milwaukee WI truly lived up to his royal moniker: The King Of Rock And Roll. Here's a picture of us all together in Toronto next to a sign that "someone" altered... (l to r: Nato, Sam, Daniel, Luke, Mike) 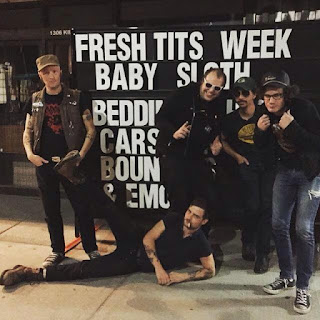 This tour started strong, was strong up the middle, and ended strong - if a bit poignantly. Normal, Illinois has, for the past four years, been an ill-kept secret powerhouse for touring bands thanks to Zak and his Firehouse Pizza Pub. Everybody from Lucero to the Chill Dawgs have passed through over the years, and always the city and people have made the bands feel so welcomed and celebrated! Now, Firehouse has ceased doing rock'n'roll shows. We were honored to play the final show at Firehouse, and we're sad to see it become merely a place that serves food and drinks... no more of Thee Spirit Of Rock'n'Roll. Thank you for everything over the years, Zak and Firehouse and Normal!

And on that note, the tour dates for our next run are up now on the right side of this page. Check 'em out - we're going to Florida in July!

p.s. thanks to Suki Nelson for taking us to PNC Park in Pittsburgh for that Pirates/White Sox game!
Posted by Nato at 9:08 PM