Back In Mpls: Much To Rake In The Fall

What a summer! I can't believe how much touring we did. People were making fun of me at a show last night for being gone so much. Dang. And you know, we're not done travelling, nowhere near it, we'll be running around the Upper Midwest all autumn and winter, and we've got plans for January that would take us to warmer climes for a week-plus (can't disclose details yet, though). Anyway. After 5 weeks of road partyin', we made it home in one piece - despite the week after Awesome Fest Siete having a couple pitfalls, the tour ended on an extremely high note in Russellville, Arkansas, and Cape Girardeau, Missouri. But hey... oh, once more for the record: Braden Franklin kicked ass on drums all tour long. We were so happy to have him with us! A great guy and a great character.

Awesome Fest VII was so brilliant, people. So fucking cool! We were there on Thursday night for our Pre-Fest show, and then for the Real Deal (tm) on Friday and Saturday (and a little bit on Sunday, just hanging out before our drive to Las Vegas). Here are some photo highlights, and also first a cool video from Eager Beaver Records (not sure which member of Worthwhile Way actually filmed this, so thanks to all of you, and kanpai itsumo, itsumo kanpai!), here we go with "Julie (Hang Out A Little Longer)" and Braden Franklin on the drums!


Mike Cranberry played the second half of our set, by the way. Our set was such a blast! Thanks to everybody involved in Awesome Fest 7, and the good people at The Void (the club we played). You know, I'm sure that people took plenty of awesome action photos of us at AF7 (send 'em to natopaisano@gmail.com or just tag us or something), but there are two photos that sort of sum up everything for me. First, this picture of me eating THE BEST FOOD ON THE PLANET, that is to say Mexican food (fish tacos) in San Diego! (Photo by Dan Anguiano, thanks to Harry Jerkface for tagging me so I could remember this memory)... 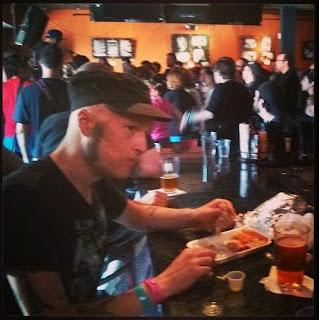 Seriously, look at those fish tacos (99 cents each from Vallarta on El Cajon). Look at that IPA of some kind (it was too loud to hear what the bartender said, but he definitely poured me something hoppy). Awesome Taste VII!

And then there is this picture of Sam, which is probably going to win him TIME Magazine's Man Of The Year award... 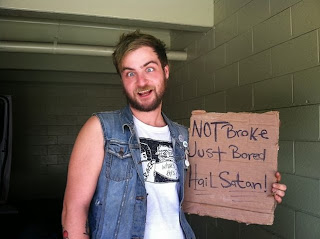 Am I right? Anyway, thanks SO MUCH to everybody who came and saw us on this insanely long Promises To Deliver Tour Part II! And really, almost half the summer was spent on the road, trying to reach ya, so if you caught us anywhere out there, thanks to you, too. We'll be back! And right now, we're playing lots of local and a few regional shows, so you Upper Midwesters will have a chance to catch us if ya need one.

That's all for now,

p.s. ADD and Dead Broke are going to repress Promises To Deliver soon. If you're the sort of person who wants to make sure you get a copy of the first pressing, you better get you one soon! Also, Dead Broke Distro still has some colored vinyl available for ya, but they're running out so head on over!
Posted by Nato at 5:05 PM No comments: