It's official! Promises To Deliver, our first proper album, is ready to go! The record will be available on LP and CD, and is a three-label release split between ADD Records (who have done all our 7"s thus far), Eager Beaver Records (in Japan!), and Dead Broke Rekerds.

And I am very excited to announce that the third of the three labels, Dead Broke, has created your go-to page for streaming some of the songs from Promises To Deliver. Click the link to hear two new tracks: PROMISES TO DELIVER!

Now, here's a picture of us pretending to be a totem pole, at the Turf Club one night. 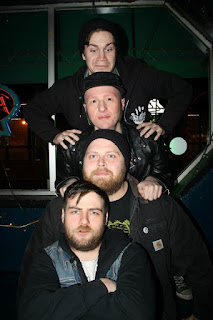 Allright, all that aside, let me say one or two more things about this album. Promises To Deliver is a nine-song, 36 minute record made up of songs I've written over the past few years - some newer than others. It's the first proper album I've made in a "Nato-and-the-band" context (as opposed to albums with the Used Kids, Modern Machines, etc.), but it shouldn't be treated as a solo project. Mike, Kyle, and Sam all had tremendous input and impact on the record, and we would have a very different (and I think inferior) final result if it had been made by session musicians who weren't truly part of the band. We already want to make another.

Counting Promises, I've now been a part of five full-length albums, as well as an 8-song 12" 45rpm (record fans can argue over whether 12" 45's count as albums or not, it's one of the classic rock'n'roll arguments). This one took longer to make than most, and cost a little more, too. I don't regret that - I've never played on a record that sounded so good! (Thank you, Jacques Wait.) I guess I wouldn't have minded some Hammond B-3 on the tracks, but the Blue Diamond Band didn't have a keyboard player when we wrote and recorded this, so we decided to stick with the instruments we actually play live. Feel free to add your own keyboard parts to the thing. We might one day, too.

If you count yourself in that population of folks who consider themselves fans of my music over the years, then I sincerely thank you for that, and I hope that you like our new album, and I hope to see you singing along with some new songs in some basement or bar out there, not too long from now. We'll be touring a lot this summer, and we're going to make it to just about every region of the USA. See you then! As always, stay free and be excellent to each other, and I'll see you in hell. Tacos,